The short course comprises a 750 metre sea swim, 21 kilometre bike ride and 2.5 kilometre. Ian's never undertaken such a challenge before but has already started training and feels quite confident.

So what motivates someone to take on something as daunting as a triathlon for charity? In his own words, Ian tells of his own experience of critical illness and what's driven him to take on this challenging endeavour.

I was in a serious RTC in South Wales where the other driver lost control of his car and collided with me. My immediate injuries included bilateral fractures of both legs, a fracture of the L4 vertebra and a rupture of my small intestine. Following an emergency laparotomy I developed peritonitis septicaemia, ARDS (acute respiratory distress syndrome) and renal failure, this almost resulted in my death, the family were called in. Thanks to superb treatment in the Intensive Care Unit I recovered.

Following 10 days of medically induced coma following the laparotomy I was immobilised and tracheotomised – totally unable to communicate and mentally unable to establish where I was and what had happened.

I experienced approx 5 days of 'coming round'; total disorientation, mind trying to work out where I was, and why, very upsetting, hell perhaps! I experienced cyclic dreams, nightmares, fantasies, horror of being unable to communicate and establish what was going on and need to work out what was happening. It was, without doubt, the most distressing period in my life. 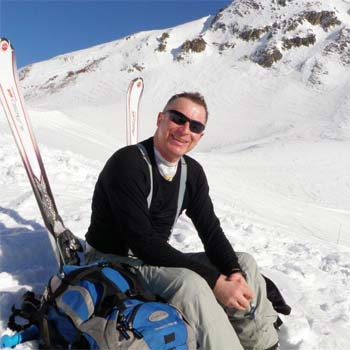 Following my conscious awareness of the accident (approx 3 weeks after the event) I set targets to aid my progress, including leaving hospital, starting physiotherapy, home activities, getting back to my sports, sub-aqua, skiing, surfing, walking etc also a 'thank you' meal for family and friends, also a pre-planned vacation and returning to work. These were very important to establishing a structure to my recuperation.

During hospital stay I focussed on physical improvement and maintaining positive attitude, aware that there could be later emotional backlash. Hospital care from ICU onwards was superb, though I am aware that there were failures initially in diagnosing soft tissue damage with drastic consequences, ie. near death. Family and friends tremendously were tremendously supportive – I was overwhelmed by their response, support and care – I felt guilty for all they were doing for me! I left hospital in early October.

In late November 2007 I became aware that I was becoming emotional, weepy and suffering from flashbacks to my nightmare time in ICU, I also felt the I was on the 'other side of a fence' to or isolated from the rest of my peers in my brush with death and had experienced things which those close to me had no experience of (and I hope they never do). Initially I talked through some of the above with close friends and a younger brother immediately following a breakdown at a comedy show. It was triggered by flashing lights (reminding me of my very disturbing 'glimmering room' nightmare) I knew that I needed professional assistance. I organised private counselling. The counsellor diagnosed Post Traumatic Stress and I had a number of sessions with her. I found it extremely useful to talk through my experiences with a neutral, disinterested third party with an understanding of such matters.

I worked very hard to come to terms with what happened to me psychologically in ICU, I will never be able to adequately describe the horrors I experienced and the inability to work out if I was alive or dead and why I was being so tormented by those around me (the hospital staff where clearly removing the organs of fellow patients and me for a criminal enterprise).

I recall clearly responding to a Yes/No finger squeezing conversation with an older brother (I was effectively immobile and had a tracheotomy precluding speech).

I was able to answer the question 'Is there anything I can do for you?' 1 squeeze – 'YES'

My desired answer – 'Please – pull the plug'. What answer I could give with squeezes… none!

Now I am truly grateful that I couldn't express my desires, though at the time I would have been relieved to have been let go.

Over a couple of years the fear and horror of what happened diminished tremendously, I learnt to be able to open up my little box of memories and look over them in an almost disinterested way – as long as I am in control. The ripples still affect me.

I am shocked by the lack of acknowledgement, support and apparent understanding offered whilst within that IC unit and afterwards. The physical / medical care was tremendous, the pastoral support was abysmal. As I learnt about ICU delirium and how some hospitals do respond positively I was disappointed in my experience of this aspect of patient care in the hospital I was in.

I did return to the IC ward to see where I had been and learn more about what had happened to me. The staff where very warm and helpful but declined my offers to come in and give a patient's point of view what was seen through my eyes – what a missed opportunity.

For the last few years I have been rather tardy in doing something positive to assist others in the understanding of potential consequences of illness in an IC situation. My aim is to do a triathlon in June 2012 to raise funds and increase awareness of ICUsteps and what the organisation does. I do work abroad at odd times, so if I do miss the swim /ride / run date I have asked a close (and fantastically supportive during and after my illness) friend, Sam, to run on my behalf – she has agreed and is doing the longer version - mad fool!