In 2006 a former ICU patient and attendee to ICUsteps drop-in evenings, Mike Willis embarked on a motorbike adventure just twelve months after being treated in intensive care. Through raising sponsorship for his journey, Mike is also ensured that the support he received will also be there for ICU patients in the future.

Mike summarised his story, reasons and plans before setting off…

On Tuesday 7th June 2005 I attended Milton Keynes day care centre for keyhole surgery on my gallstones. Unfortunately things didn't go to plan and on Sunday 12th June I ended up in ITU after a second major operation.

When I left ITU and went to Ward 18 to recover I was visited by a follow up nurse named Mo Peskett who introduced me to a new support group called ICUsteps. This group was about to start a drop in centre for people like myself who needed some help and support from people that had similar experiences.

During my stay in hospital a relative brought me a book to read called The Long Way Round by Ewan McGregor and Charley Boorman. I don't normally read books but this somehow gripped me. It was about two actors who shared a love of motorcycles and decided to travel from London to New York 20,000 miles the long way round.

This was the inspiration I was looking for, to get me back on my feet, a motor cycle that's what I need. One major problem, I didn't have a licence!

As soon as I was fit enough to travel I got myself down to the motorcycle shop and purchased a bike I told the dealer I would be back in a month to collect it when I had my licence.

After passing my test and collecting the bike I talked to my brother about this idea I had about riding up to John O'Groats hugging the coast line and strangely enough he too had seen the TV series and had the same idea and so we set about planning it.

We'll start the journey in Milton Keynes on 17th June 2006 going west to begin with through mid Wales up to Bangor through Snowdonia National Park. Then, following the coast roads, we'll head to Chester and onwards through the Lake District up to Penrith, Carlisle, Dunfries and Stranraer. Continuing along the west coast of Scotland we'll continue north to Greenock, via Glasgow, Loch Lomond, Fort William and Loch Ness. There, we'll turn west again to the Kyle of Lochalsh and north up to Garve, Lairg, Thurso and John O'Groats. 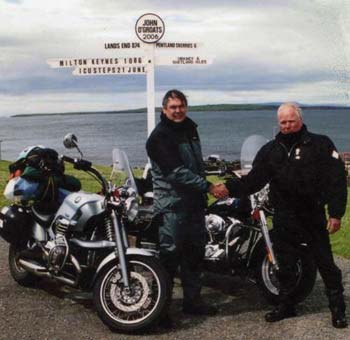 Mike Willis and his brother at John O'Groats

From John O'Groats we head back down to Wick then follow coast road to Inverness, east to Peterhead down to Aberdeen and Perth. Continuing south the route will take us through Stirling, Edinburgh, Berwick upon Tweed, Newcastle upon Tyne down to York. From there it's on to the Peak District down through Derbyshire and home.

The last leg of the journey from York will depend on time we may go into East Anglia.

We intend to stop at camp sites, sleeping in tents as much as possible and have allowed 2 weeks but the return date will depend on the weather and other unknowns.

After some months and many visits to ICUsteps I learned that raising funds to keep the group going was a bit of a problem. I thought these people have helped me through the worst time of my life, the best way I could repay them would be to combine my trip up to Scotland with fund raising for the group.

On the 21st June 2006, Mike and his brother reached John O'Groats and returned safely. Thanks to his fund-raising efforts he raised over £1000 for ICUsteps ensuring our work could continue for months to follow.